« To Win We Must Harness the Power of Concentration | Main | Do Your Customers Sabotage or Promote Your Success? Part I »

Do You Think Selling Is Tough? Try Selling Lemonade in Oregon!

Times are tough all over for salespeople. No matter what line of business they are in, there are always unexpected obstacles confronting them. Consider the case of 7-year old Julie Murphy who persuaded her mother to help her set up a lemonade stand at an art fair in Portland.

According to The Oregonian, Julie and her mom set up a table, taped a sign to the front that read “Lemonade 50 cents,” carefully mixed the ingredients (Kool-aid, water and ice) in the cooler, and before she was done, a man walked up and bought the first cup. Julie thanked the customer with a smile and proudly pocketed the two quarters. After selling a few more cups Julie had an unexpected visitor. A stern-looking lady with a clipboard walked up to the stand and asked Julie and her mom if she could see their license. What license? Well, if you are selling to the public, you need to have a temporary restaurant license, which the county sells for $120. Julie had no idea what the adults were talking about. The woman with the clipboard worked for the health department, and she took her job of protecting the public and her authority to enforce the rules very seriously. Julie’s mom tried to explain that Julie was cleaning her hands with a hand sanitizer; she didn’t touch the ice with her hands and used a scoop. The clipboard lady didn’t relent. She decided that they had to stop selling lemonade, and if they continued, they could get a $500 fine. 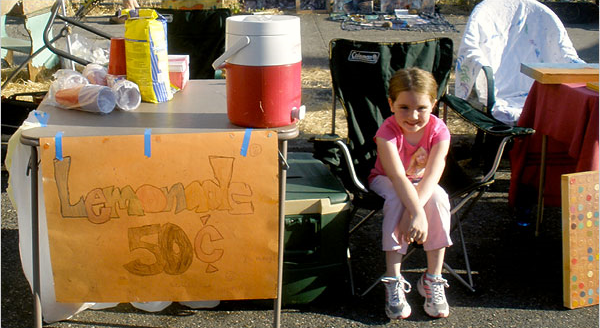 Julie and her mom decided to pack up and leave, but the word spread quickly from booth to booth, and people gathered around Julie’s lemonade stand offering their support. One idea was to bypass the rules by giving away the lemonade and accepting donations. There was an instant groundswell of support from other vendors. Some people wanted to stage a protest. Others were more pragmatic, and one of them went on the PA system to rally the crowd to support Julie’s lemonade stand. It didn’t take long for the generous Oregonians to make a beeline to Julie’s business, gulping down lemonade and dropping quarters and dollar bills on the table. Julie was the sales champion of the fair. But soon the tide turned when two health inspectors showed up ordering Julie and her mom to pack up and leave. According to the eyewitness reports, there was “a very big scene.” The crowd around Julie’s table got angry, and the clipboard busybodies felt threatened. Julie and her mom started crying, and they decided to pack up and leave.

The following Sunday, a radio show called BURN radio (Bottom Up Radio Network – an online site that calls itself “a voice for radical anarchist thought and action”), http://www.blogtalkradio.com/burnradio reported the story under the headline “When the State gives you lemons…GIVE THE STATE HELL!!” The site is organizing a “Lemonade Revolt,” to take place in August at the Last Thursday event. The talk show host invited citizens to sell lemonade at the fair and stare down the clipboard army.

Julie’s story tugged at the hearts of the media outlets, and the story was reported nationwide, including in the New York Times. After a few days, the “lemonade authorities” softened up a bit. According to news reports, the county chairman apologized to Julie’s mom for the shutdown.  He said that the inspectors followed the rule book, but “a lemonade stand is a classic, iconic, kid thing to do and I don’t want to be in the business of shutting that down.”

After the media boost and the chatter on social-networking sites, Julie got a second chance to sell lemonade and raked in more than $1,800, enough for a trip to Disneyland. Julie’s mother said, “We just really appreciate everything that everyone did. [Julie] got her lemonade stand, she had a good experience and that’s all she wanted in the first place. And she met some really cool people.”

GREAT article! Think how much YOU would sell if the general public cared THIS MUCH about you, your product, and your success!

Having a cause as opposed to a generic product makes a WORLD of difference. (having a cute, 9-year-old daughter doesnt hurt, either. LOL!)