Someone once said that when 200 people watch a movie, you won’t find two among those people who experienced the movie in the same way. Why? Because every viewer sees each scene from his or her own unique platform built by past experiences. When 18,000 people attend a megashow like Dreamforce, there is even less of a chance of finding two people who see the event the exact same way – with the exception of the many journalists who reprinted Salesforce.com's press releases verbatim and then added their own signature. 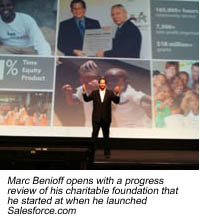 fewer than 10 years. In a nutshell, Dreamforce had four parts that can be compared to the elements recorded by Greek philosophers: fire, earth, air, and water.

The fire was Marc Benioff. When he enters the stage you know in a heartbeat that you are in the presence of a human volcano. This year the volcano ran a race against the audience’s bladder capacity. (The keynote ran an hour over schedule.)

The air came from "releases" such as Chatter, a social networking tool that hasn't been launched yet.

The water was the refreshing interaction between people sharing streams of ideas and creating a shower of fun through unscripted conversations and performances, as you shall see in the short iPhone video clips. (Click on each image)

A standing room only crowd is taking in a dazzling, multimedia show that rivals a Vegas act.

I always like to sit in the front row at meetings, next to Salesforce.com 's presidents Frank van Veenendaal and Jim Steele. It was fascinating to watch Benioff and Newsom promote their tested formula for combating homelessness. Unfortunately their unscripted conversation went on too long. Benioff's keynote ended a full hour past the two hours scheduled.

There were 18,000 people in the audience when Salesforce.com founder Marc Benioff kicked off Dreamforce with "the most exciting announcement ever."

A quick interview with senior vice president Brett Queener about Chatter, the newly released social networking tool that's built into the application and allows salespeople to communicate and share business content across the organization.

Professional ushers directed the audience to the meeting hall where Colin Powell delivered the keynote. This usher had no clue who the keynote speaker was.

Jigsaw hired a talented street performer to draw attention to the common challenge of dirty data. 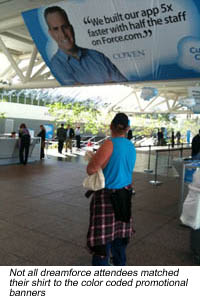