« Where Selling Is Headed in 2010: Action Steps to Winning – Part II | Main | Three Ways to Get Better Results on Every Sales Call »

Lessons from a Most Memorable Meal: a Recipe for Success

This year my birthday came on the same day as Thanksgiving. Of course, that called for a double celebration and we decided as a family to celebrate at the Inn at Little Washington which is located in the foothills of Virginia’s Blue Ridge Mountains, a 90 minute drive from Washington DC.

The Maestro behind a magnificent meal 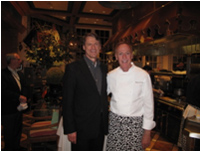 Patrick O’Connell is a self-taught chef who financed his education working as a waiter since the age of 15. His first dream was to become an actor, but he soon discovered that it would be better to create a “living theater”, a restaurant where fine food and refined service interact in an exquisite setting to create a divine experience for every guest. Patrick spent hours in the local library reading cookbooks and developed an insatiable curiosity about what makes a great dish that surprises and delights the customer. He learned about the historical background of a dish and immersed himself in French culture by visiting top rated restaurants in the French countryside, talking to owners of country inns and famous chefs. In 1972, when Patrick started a catering business in Little Washington, Virginia, the population of this tiny town was less than 180 people. His kitchen consisted of a wood-burning stove and a frying pan. After creating a booming business that catered to the many wealthy people who owned big farms in Rappahannock County, Patrick and his partner decided to open The Inn at Little Washington in 1978.

Early on, Patrick made a decision that he was not merely feeding people, or selling food, but to providing a peak experience that his guests would never forget. The dining room features only 30 tables and the adjacent Inn offers its out-of-town guests 18 rooms and suites. Patricia Wells of The International Herald Tribune described him as "a rare chef with a sense of near perfect taste, like a musician with perfect pitch.” Over time, Patrick’s quest for stratospheric levels of culinary excellence earned him a Mobile Five-Star rating for the restaurant as well as the Inn.

The moment you approach the Inn, you are treated as a welcome guest. You are greeted outside by a receptionist who opens the door and escorts you to the sumptuously decorated reception area. There is no standing in line, and you won’t hear a condescending question like “do you have a reservation?” Rather, you will hear, “Thank you for joining us this evening; may I have your name please?” Next, you’ll be escorted to a sitting area where you will be offered drinks while the staff prepares your table.

Our Mood is Measured and Managed

After a short wait we were seated and without knowing it, were on stage where our waiters quietly observed our mood. In a Harvard Business Review article (3/2006), Patrick O’Connell explained the basics of customer experience management. “After the guests are seated, the waiter assesses the party’s collective mood and ranks it from one to ten. The score is logged into our computer system along with the order and appears at each workstation throughout the restaurant. For example, if the prevailing mood is a three or four, the whole team works together to elevate it.” During our tour of the kitchen at the end of the meal, Patrick explained that waiters may bring complimentary champagne to the group and then reassess the table’s mood and update the score. Mood management continues until the end of the meal with the goal that no guest should leave with a score lower than nine. (If you want to “game” the system, try to fake a sour face after you’ve been served your last dish – you are practically guaranteed an additional dessert.)

Our mood was festive. I had to chuckle at the misspelling of my name on the menu – something I am used to, but when I pointed this out to the waiter, he apologized profusely. He took all menus back, corrected the misspelling and handed each of us a fresh copy of the menu at the end of the meal as a souvenir.

A mini banquet of tasty compliments from the chef

While many great restaurants offer an “amuse bouche” with compliments of the chef, The Inn at Little Washington offers a plate laden with white porcelain spoons with little delicacies such as tuna carpaccio, baby rock shrimp with guacamole, prosciutto with melon, or, my favorite, the world’s smallest baked potato. (This potato is smaller than a golf ball, perfectly cooked, filled with sour cream and a sprinkling of bacon). The waiters encourage you to take more than one of these delicacies, and they are eager to offer seconds.

The second amuse bouche was an apple rutabaga soup served in a tall, narrow glass. It is a creamy delight with a touch of sweetness (maple syrup). The breads include a freshly baked white roll and a thinly sliced rye with a slightly salted crust.

The wine list offers a great selection from around the world as well as rare vintages with eye-popping price tags. For example, a magnum bottle of Chateau Petrus, Pomerol 1996 sets you back $4,500, a Chateau Mouton, Rothschild from 1945 is $7,950, a Chateau d’Yquem produced in 1900 sets you back $10,000. If the 2,400 wine selections are too overwhelming you may ask the sommelier for a wine pairing with your meal, or you can order wine by the glass at reasonable rates. At the end of the 96-page wine list you’ll find a quote from Thomas Jefferson “Water separates the people of the world; wine unites them.”

We ordered a magnum bottle of Puligny Montrachet, 2005. When the waiter arrived, I noticed that the vintage was 2000, not 2005. I tasted the wine and found it acceptable, though a bit too heavy for my taste. I mentioned the discrepancy between the wine list and the bottle and the waiter apologized, and mentioned that this was a misprint on the wine list. After a couple of sips our party agreed that the wine wasn’t that great and after consulting with the Sommelier he replaced the bottle with a wonderful Chablis Grand Cru.

The agony of pairing the right appetizers

As I surveyed the table for the other appetizers, I noticed spinach ravioli with a molten-gold center. When you cut it open, out flows a stream of warm egg yolk. 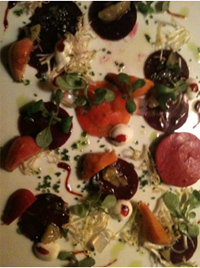 At this point I am beginning to understand why Patrick uses analogies from the stage to explain the dialogue between different ingredients on a plate. In his book Patrick O'Connell's Refined American Cuisine, he explains how he helps aspiring chefs define their culinary compositions, "I often ask them, 'who is the star or lead singer in the dish?' Once that's established, it's easy to point out that the back-up voices are competing or drowning out the featured performer. For example, the tarragon may be overwhelming the chicken, while the lemon may be so subtle that it's 'inaudible.'" 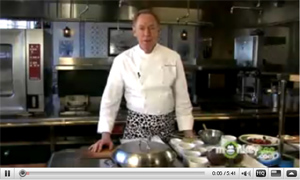 My second appetizer is a delicious sea scallop. The main course was a traditional Thanksgiving turkey with thinly sliced white and dark meats, mini Brussels sprouts, pomegranate seeds, sublime pecan-apple stuffing and side dishes delivered separately including peas with pearl onions, cranberry sauce, sweet potato puree and creamed corn casserole. I am reminded of Patrick’s philosophy of allowing the countryside to take center stage on his menu. Every ingredient is fresh and most are purchased from local, organic farmers. At this point I am oblivious to time and space and completely caught up in the spirit of the moment. When the waiter brought a second helping of turkey delivered in a roasting pan fresh from the kitchen, I knew that I was completely full, but had my plate filled anyway. I realized that I was having a better meal than the Queen of England- and that was reason enough for me to continue the feast. I am sure that by this time the waiter pegged our mood meter at 10.

Patrick, who employs over 100 people, says that waiters are not allowed to speak to guests until they have completed their first year of training. He told one culinary writer that newly hired waiters don’t fully understand how savvy and knowledgeable his guests are and how much there is to learn.

Desserts are not the end 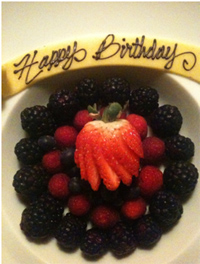 As our waiter passed the dessert menu, I asked myself how many miles would I have to run on a treadmill to metabolize another 300 calories? I passed on a dessert named “The Seven Deadly Sins.” I said no to everything to the chagrin of the waiter who suggested that I “go rogue,” so I asked for mixed berries. The special plate was delivered with a "Happy Birthday" ribbon made of marzipan and chocolate.

A tour of the Kitchen

After settling our bill, the waiter invited us to to tour the kitchen and visit with Patrick O’Connell. Patrick graciously showed us around his spotless kitchen where his moves are often followed by TV cameras. He suggested that the next time we visit, we should eat in the kitchen (there is a special table for six) where we can watch the food being prepared. Patrick remembered that we covered his restaurant in Selling Power about ten years ago, where he told us about his “mood management” technique. He is always eager to innovate and said, “If you came here a year ago and had the lamb, and you had it again today, you’d say, ‘that’s exactly how I remember it.’ But in reality we have incorporated several improvements. We can’t stand still in this business.” Innovation keeps Patrick ahead of his competition. While many restaurants folded during the recession, The Inn continues to have a long waiting list. There is no recession at the top of the food chain. We all received a small cardboard house - a replica of the inn. When you lift off the roof, you’ll get access to a handful of treats such as chocolate covered almonds, chocolate truffles and assorted cookies. It was one of the most memorable meals I had in my lifetime.

1. Always deliver more than what the customer expects. Instead of offering one amuse bouche, Patrick delivers two.
2. Manage your customer’s mood from the opening to the close. Make it your goal to have the customer leave on a high note and they will return more often.
3. When you made a mistake, apologize quickly and do everything you can to correct the situation.
4. We cannot stay competitive without ongoing innovation. Customers expect the best from us, and we should expect even more from ourselves.
5. Excellence in execution is always the result of excellence in thinking, planning and preparation. Our work speaks volumes about who we are.
6. If you deliver excellence beyond compare, geography doesn’t matter.