When David Thompson, CEO of Genius.com, made the announcement that the bar was open prior to the social-media panel, the audience was thrilled. David explained the need for a social-media policy, since sales leaders don’t want their salespeople to waste time, but rather to invest their time in the pursuit of business.

David was a highly energetic MC who left the stage to engage the audience with pointed questions, which lead to a highly constructive dialogue.

Nigel Edelshain presented an innovative idea that all sales leaders should follow. But first let me say that it was Nigel who actually came up with the name "Sales 2.0." 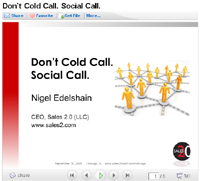 He was so convinced that this would become an unstoppable movement that he named his technology company Sales 2.0. Nigel, in his inimitable British accent, made a convincing case: “Don’t cold call – social call”. He explained that by cold calling, you get a 100:1 conversion ratio, which is obviously time-consuming and expensive. Nigel’s experience shows that using social networking for lead generation results in a 12:1 lead-conversion rate. For those who did not attend the conference, here is Nigel’s slide show.

Kevin Popović, the founder of Ideahaus, stole the show with his personal charisma, superb content, and fast rate of speech. When I first saw Kevin’s presentation slides, 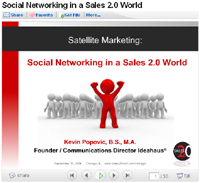 I realized immediately that he is a visionary who truly understands where social media is headed and what we need to do to master this new medium. Kevin underlined the fact that the old push strategy no longer works. The Internet has changed the way customers buy, but many sales organizations haven’t received the memo yet. Kevin’s prescription was very much in line with what I said in my opening: Ditch the pitch and engage prospects in a conversation. Take a look at Kevin’s slide presentation.

Kevin actually recorded the entire social-media track with his iPhone while sitting on stage. If you want to spend an hour listening to the complete Panel presentation, click here. It was a clever idea, but imitators should be advised to check local government laws before recording without authorization. Thirty-eight states and the District of Columbia permit individuals to record conversations to which they are a party without informing the other parties that they are doing so. Linda Tripp recorded in Maryland where the consent of all parties is required. Kevin technically tripped over Illinois state law, but he did it for a good cause.

Comment on Kevin’s blog: Social-media is not about extending your ego-system, but about building an ecosystem for conversations to flourish, for needs to surface, and for opportunities to arise. It’s not about self-promotion: it’s not about pitching. So what’s all that self-promotion doing on your blog Kevin? Let your great content do the selling!

Anneke Seley, CEO of Phoneworks, dazzled the audience by logging on to a number of Websites and showed how a salesperson uses LinkedIn Updates to share success stories, which in turn lead to inquires and online conversations. The sales rep also included an online presentation in his LinkedIn profile. He also keeps an eye out for customers who leave their company so he can then sell them again at their new place of employment. Anneke also shared how Dell creates a few million dollars in extra sales following tweet streams. Anneke promised to blog about her Sales 2.0 presentation (no PPT), and I plan to add a link to her blog as soon as it appears.

There are a number of companies that have published useful social-media guides that are worth looking into:

It is obvious that social-media tools like LinkedIn,Twitter, and Facebook are ideal tools for creating sales leads, engaging prospects, sharing news, announcing new products, sharing research, offering useful ideas, uploading videos, presenting slides, etc. There is still so much to learn. Here is a guide to 63 social-media conferences to be held between today and the end of 2009.

Final word: Don’t miss the next Sales 2.0 Conference on March 8th and 9th, 2010, in San Francisco. It will be at the Four Seasons hotel.

Posted at 09:47 AM in Sales Management | Permalink

Thanks for this excellent recap AND for your continued support of the Sales 2.0 community.

Since this is the last Sales 2.0 Conference of 2009, I would just like to go on record and say THANK YOU for the huge amount of work you (and your colleagues at Selling Power) have done to hold these conferences.

The Sales 2.0 movement now has a head of steam and the conferences have been the coal in the boiler. Sales 2.0 would be 1-2 years behind where we are now without your help.

The Sales 2.0 "chicken soup" is ready and it's very tasty. Let's see how many companies are hungry for better sales results.